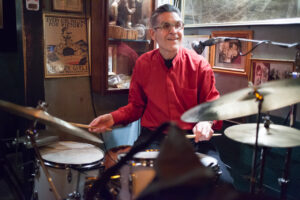 Gerry Kennett began his musical career on clarinet and saxophone, but switched to drums in high school. A member of the award winning University of Nevada Jazz Band, he soon branched out to nightclub and dance band work. After performing many shows at Harrah’s, Harvey’s, and the Nugget in the Reno Tahoe Las Vegas circuit he moved to the San Francisco Bay area, becoming a popular drummer and singer and established an active teaching schedule. Val Diamond, one of the stars of Beach Blanket Babylon relied on Gerry’s drumming for many years in her solo performances at the Great American Music Hall, Bimbo’s,  and The Boarding House. With his own band,  and as an in demand sideman he began a long career in the private party band business. After playing and emceeing for over 1000 weddings and private parties, Gerry still enjoys being a part of these special occasions and celebrations and can be seen regularly at various jazz clubs and hotels in the San Francisco Bay Area. On the right gig he can be also heard on harmonica and jazz whistling.

Poh Soon Teng is a percussionist/drummer in the San Francisco Bay Area. He has performed in various ensembles around the world from featured soloist with the Ohlone Wind Orchestra to sideman with the medieval music ensemble from the Gutenberg Institute.

Teng began playing music at the age 16 when he started playing with his high school’s marching band. However, being a late starter did not stop his need to becoming a better musician. In 2004 he began taking private lessons with Boon-Kah Lim and started playing in community orchestras and symphonic bands. By the age of 17, he received his first professional gig freelancing and subbing for his teacher in operas and chamber ensembles.

In 2006, Teng attended Contra Costa College in San Pablo, CA where he studied with Wayne Organ. There he nurtured his skills as a percussionist freelancing for multiple orchestras and musical theater. He was also a regular member of the Kensington Symphony and the UC Berkeley Summer Symphony at the time all while doing voice as a second instrument singing in jazz vocal quintets and chamber choirs. He even attended multiple Jazz Festivals all over California as a vocalist. Teng was also playing with award winning indie musician Ben Ross at the time.

In 2008, Teng transferred to California State University East Bay where he was awarded the Anne & Gordon Getty scholarship to study with Arthur Storch. There he played in almost every school ensemble available from Symphonic Band to Orchestra to the East Bay Singers and the Jazz Workshop. He was also playing regularly with the Silicon Valley Symphony while still freelancing for multiple ensembles from regional orchestras to youth orchestras to musical theater. It was then that Teng also debuted as a vibraphone soloist. He was also appointed the position of section leader of the CSUEB Symphonic Band Percussion section. He was also given the position as percussion coordinator at CSUEB. Teng also played as a featured soloist with the Ohlone Wind Orchestra playing Robert Jager’s Concerto for Solo Percussionist and Band. Teng has also recorded drumset and percussion for multiple film scores including the award winning movie, All About Dad. Teng recieved the CSUEB Music Scholarship for the remaining of his years at CSU East Bay, 2009 and 2010 and graduated with a Bachelors of Arts in Music Performance in Percussion in Spring 2011.

Currently, Teng teaches private lessons in Hayward, Fremont, and San Mateo. He is also known for his work teaching classes, conducting sectionals and rehearsals and such for middle schools, high schools and the La Honda Music Camp. Teng also plays in the Saint Augustine’s Church Orchestra, The Poh Teng Group and freelances regularly around the San Francisco Bay Area as a sideman and as a soloist.